What causes sleep paralysis? Can it be prevented?

What is sleep paralysis?

Think of it as an in-built safety mechanism that prevents you from acting out your dreams. When you’re dreaming you naturally lose muscle tone so you’re unable to act out your dreams. This subconscious paralysis keeps you safe when you’re fighting dinosaurs or whatever you’re doing in your dreams.

For as long as you’re dreaming, you’re out of danger. However, the downside is when you suddenly wake up and the paralysis persists. At most, this alarming sensation will only last a matter of minutes but because it’s happening in the middle of the night it can seem like so much longer. You’re disorientated, you’ve just been dreaming and your arms and legs appear to be pinned to the bed. 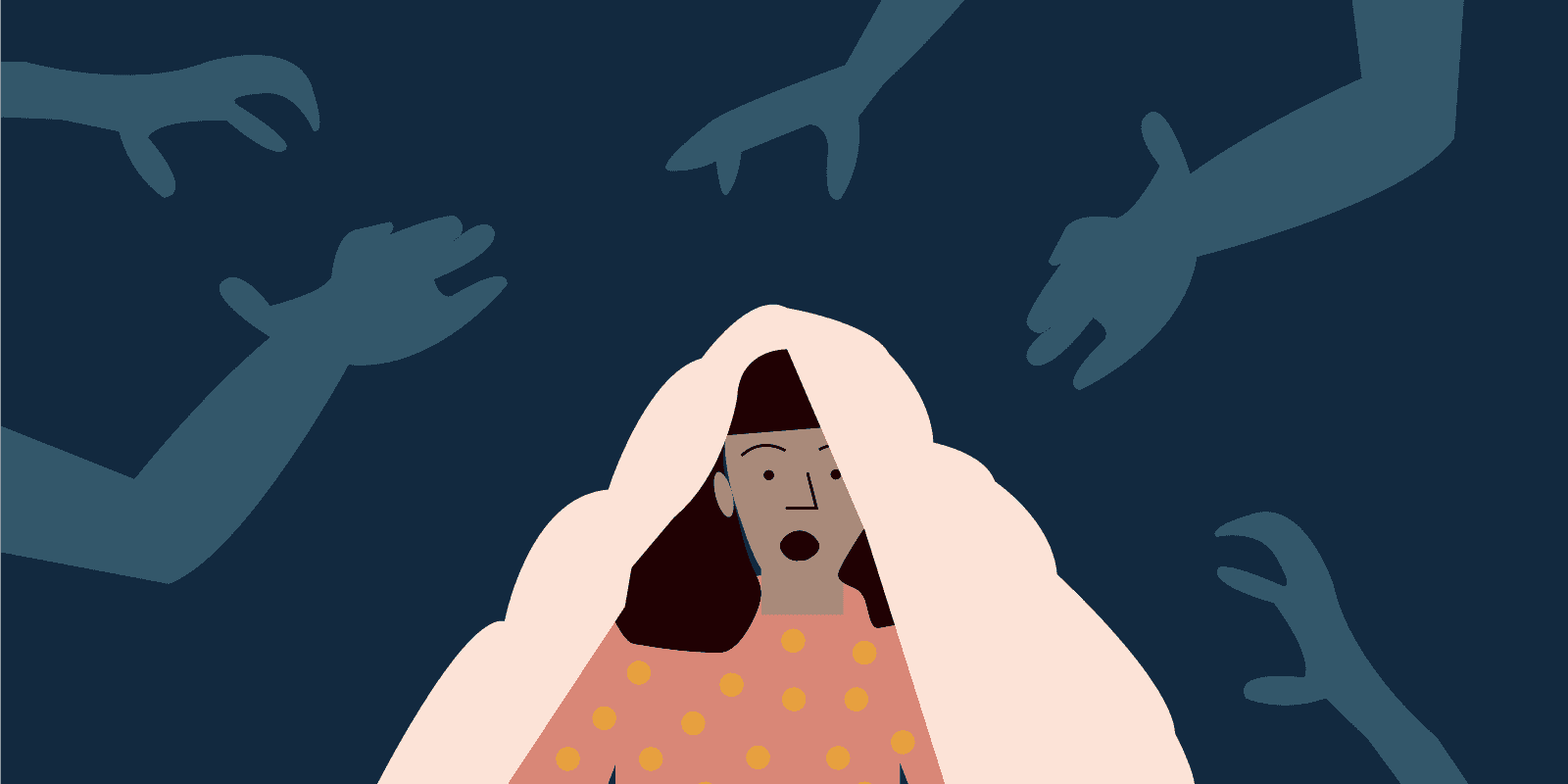 It’s actually more common than you might imagine and many of us encounter its unnerving side effects without truly understanding what’s happening. You’ll often feel:

However scary it may be, it’s pretty normal to experience sleep paralysis. Working out what’s happening is half the battle. When you understand the condition, you can rationalise the experience and realise it’s nothing to fear. So what else do you need to know?

It affects men and women equally

Research has shown that somewhere between 8% and 50% of people encounter sleep paralysis at some point in their life and approximately 5% of people have regular episodes. 1 2 Men are just as likely as women to experience sleep paralysis and it can often rear its ugly head during childhood.

Sleep paralysis and insomnia are linked

Sleep paralysis is rarely observed in a laboratory setting so there is limited objective data on the phenomenon. As a result, it’s difficult to say if sleep paralysis ― in itself ― can negatively affect your sleep.

However, in terms of subjective reports, it’s been found that poor sleep quality can increase the occurrence of sleep paralysis. 3

Some studies have shown that sleep paralysis can lead to difficulties in falling back to sleep after the event. 4 This might be because of the intense feelings of fear, or sense of threat, that you experience. It may be due to a more general psychological stress.

It may even be due to supernatural beliefs about what has occurred. In this case you might feel unable, or even unwilling, to fall back to sleep quickly following an episode. It’s perfectly understandable. The fear of another period of sleep paralysis is often enough to prolong a restless night.

It could even be that anxiety around impending sleep paralysis could lead to difficulty falling asleep at the start of the night. If you’re worrying about the possibility of sleep paralysis when you get into bed then it’s bound to prey on your mind and affect your sleep.

If the condition occurs immediately after you wake from a scary dream, then it’s only natural to make the association between sleep paralysis and fear.

The lines become blurred between reality and fantasy and you may genuinely believe that your dream is real. In addition, it’s common for people to experience a hypnopompic hallucination during sleep paralysis.

A hypnopompic event is something that occurs when you transition from sleep to wake (hypnogogic means the opposite). You may hear, feel or see things that aren’t actually there and this only serves to increase your sense of fear ― however irrational.

Some people hallucinate during sleep paralysis

You may have experienced one of the following types of hallucination during a period of sleep paralysis 5:

These sensations can be accompanied by meaningful sounds like voices, whispers and roars or humming, hissing and static. You might also imagine physical sensations such as being dragged out of bed or feeling ‘electric’ tingles or vibrations running through your body.

It’s completely understandable that these unsettling symptoms are usually accompanied by intense emotions such as fear and panic. 6 However, emotions associated with sleep paralysis and hallucinations are not always negative and you may experience a feeling of serene calm.

Why is there a demon in my bedroom?

Sleep paralysis has been a staple of folklore, myth and legend for centuries. Cultures across the globe commonly considered sleep paralysis to be the work of demons ― or incubi ― who sat on the chests of unsuspecting sleepers.

In 1798 Fuesili painted The Nightmare in response to tales of night terrors. A chilling image depicted an incubus perched ominously on a woman’s chest with a dark horse (the night-mare) peering in from the shadows.

Take a look at this foreboding oil painting and you’ll understand why sleep paralysis suffered from an exceptionally bad press, before science intervened. 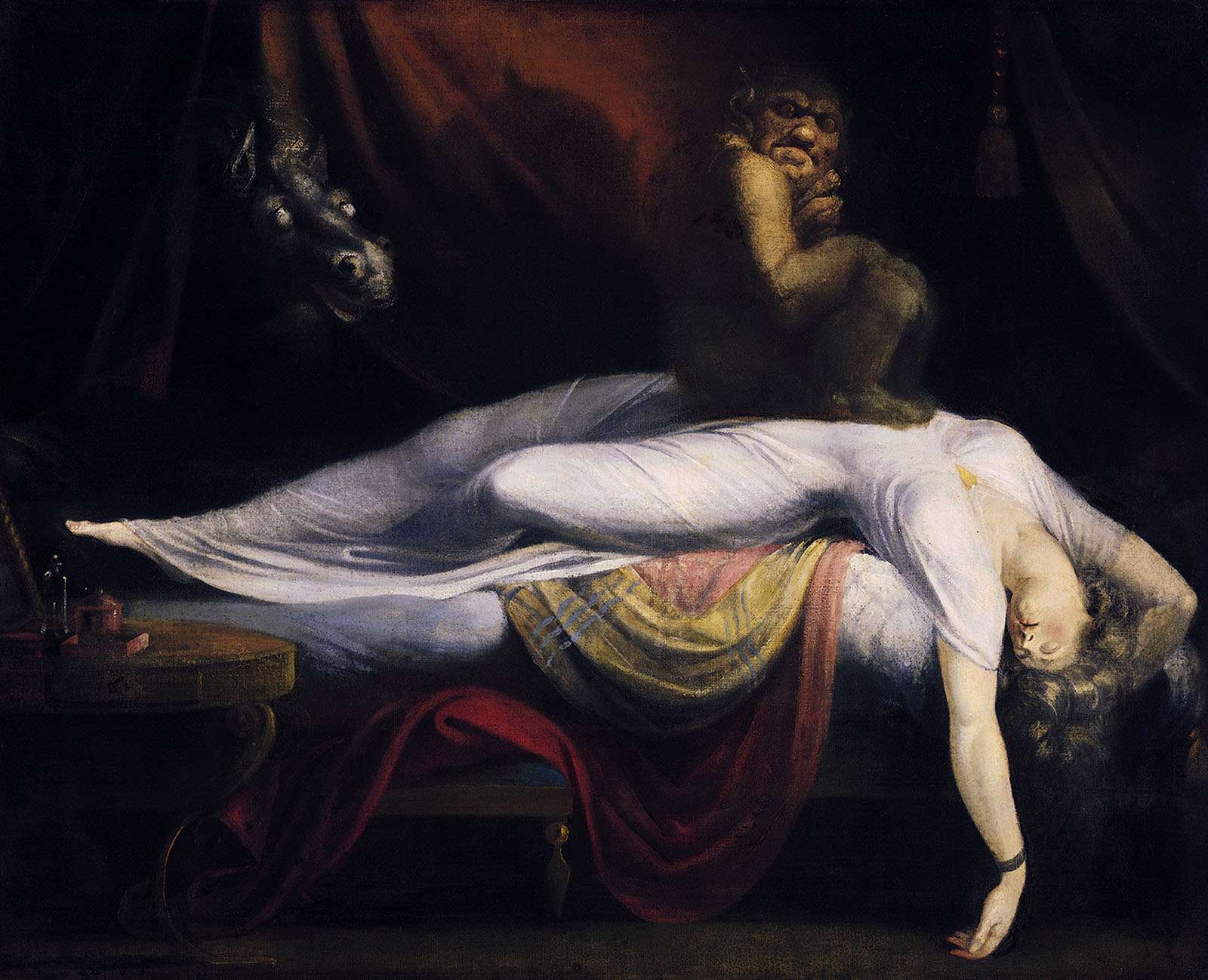 Modern science proposes that the sensations and hallucinations associated with sleep paralysis might explain reports of paranormal phenomena such as ghosts, alien abductions and the presence of demons or demonic possession.

When you dream, your dreams are essentially real to both your mind and body. If something occurs in your dream you can:

From time to time we all wake from a dream sweating, breathing heavily with our heart racing and experiencing a feeling of fear or anxiety.

Now imagine what it must be like to wake up like that and find that you can’t move your limbs or escape a punishing weight pressing down on your chest. No wonder you would interpret these sensations as evidence of your dream coming true.

If, for instance, you dream of being abducted by aliens and subjected to devilish probing – a common theme within these dreams – then waking suddenly in a state of sleep paralysis can seem self-fulfilling. You may experience the physical manifestations of your sci-fi ‘trip’ and believe in the truth of a fearful experience.

Our interpretation of sleep paralysis makes it feel scary

Many people ask if it’s all in their head. The simple answer is yes. According to some scientists, your view of the scariness of sleep paralysis has been shaped by popular culture. 7

If sleep paralysis is interpreted through a particular cultural filter then it may take on greater salience. This is particularly relevant when we consider the modern-day perception of sleep paralysis as being a terrifying phenomenon.

In 2015 there was a lot of hype around a documentary entitled The Nightmare in which professional actors re-enacted the experience of sleep paralysis as described by people who have gone through it.

The documentary proposed, quite correctly, that such cultural memes as alien abduction, the near-death experience and shadow people can often be attributed to sleep paralysis.

However, rather than being presented as a documentary film, it was self-proclaimed as a ‘real-life’ horror film. Not for the first time, the lines between reality and fantasy had been deliberately blurred as Fuesili’s 18th century Nightmare was given a 21st century multi-media makeover.

It has been suggested that the film ― and its associated media coverage ― played a key role in shaping the modern belief that sleep paralysis is a terrifying phenomenon that requires urgent treatment. In truth, for the vast majority of people, it’s merely sufficient to reassure them that sleep paralysis is common and generally not serious.

How to stop sleep paralysis

Cognitive Behavioural Therapy for insomnia ― offered by Sleepstation ― may be beneficial in reducing sleep paralysis by improving your sleep and sleep schedules. In severe cases, where the experience of sleep paralysis is having a significant effect on your mental and emotional wellbeing, treatment with Tricyclic (TCA) or Selective Serotonin Reuptake Inhibitor (SSRI) antidepressants may be warranted. 8 If sleep paralysis persists in these cases then narcolepsy could be the cause. 9

Sleep paralysis is relatively common, although some people will only experience it rarely if ever, and is a perfectly normal, experience. Although the sensations experienced during sleep paralysis can be scary, frightening and even threatening, they should be understood for what they really are: merely the continuation of the dream you were having.

When the unnerving sensations associated with sleep paralysis are understood, the experience becomes much less scary. Knowledge is therefore a key factor in managing symptoms.

If you can get to the bottom of why sleep paralysis happens, and what the symptoms mean, then you’re halfway there in terms of controlling the impact of the experience (which is largely determined by your own interpretations and level of fear).

One final piece of advice: if you really want to understand a scientific phenomenon then avoid watching movies that are billed as ‘real-life horror stories’! These films will feed your fear rather than improve your knowledge.